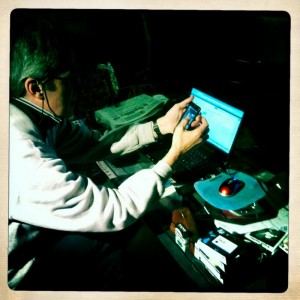 Massimo Cittadini was born in Ascoli Piceno in 1959. He received a degree in architecture in 1988 from the University of Florence. A lover of art, computer technology and mixed media, in 1985 he became a partner of the Neon gallery in Bologna, and collaborated with various artists and groups in Florence. Starting from the late 1980s his main focus turned to virtual and artificial reality and interactivity. He lives and works between Milan and Florence. Since 2003 he has held courses in web design and mixed media installations at the Fine Arts Academy of Carrara.

zoneGemma, a laboratory of biotechnological culture founded with Giacomo Verde, Annamaria Monteverdi and Andrea Balzola for the show “Storie Mandaliche”.

EXP, collaboration with choreographer Ariella Vidach and Claudio Prati from AIEP for one of the first interactive dance performances of the 90s.

“Uomomacchina” installation in which the participant can interact with the works of 20th-century artists (Duchamp, Malevich, Pollock, Schwitters and others), winner of the 10th edition of the Oscar Signorini Foundation Prize for computer art, organized by the periodical D’Ars

RealeSceltaVirtuale, (“RealVirtualChoice”), four rooms in which to play with language, music, virtual painting, and the wheel of technological knowledge.

Sorry, this entry is only available in Italiano.